Who are Olive & Lake?

Who are Olive & Lake?

Olive & Lake is a digital marketing agency based in Siem Reap, Cambodia. We’ve helped many businesses in Cambodia and around the reach their online potential and more.

Owned and operated by Sebastien Olive and William Lake, we have helped over 100s of clients and continue to help new clients each week.

Chat with Us
Continue reading

Olive & Lake was born out of a collaboration between Sebastien Olive and William Lake. They met after Sebastien was looking for somebody to help with digital marketing for the company he was working for at the time.

William had been working as a freelance digital marketer for many years and was recommended to Sebastien. In spite of their “Anglo-French” rivalry and disagreement about whether it’s called the “English Channel” or the so-called “La Manche”, William started working with Sebastien on a new project for the Embassy Restaurant in Siem Reap.

The project was a tremendous success. Together, they turned around the fortunes of the online side of the business.

Sebastien then commissioned William to work with him on 14 other successful projects with similar outcomes.

The two had an idea for their own website project and Olive & Lake grew from there. Both William and Sebastien had complementary skills and thought that they would work well together. The beginnings of creating a digital marketing agency were born. 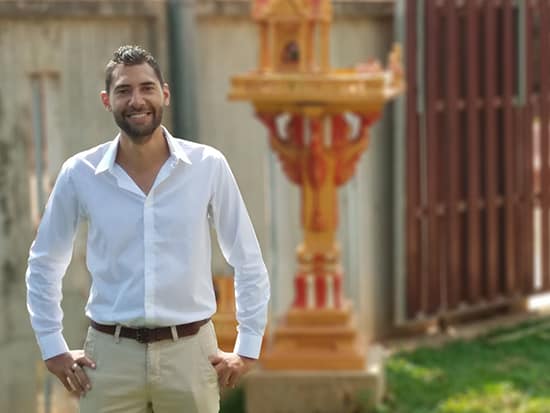 Sébastien is a Digital Marketing Specialist and a Marketing Expert with extensive experience and successes in these fields.

Sébastien discovered Cambodia in 2012 on his way back to France from Australia where he graduated with a Bachelor’s degree in Business and Marketing.

He went back to France and graduated from Business School with a Master’s degree in Business and Marketing from Kedge Business School and worked as a Project Manager for Le Groupe La Poste. After 4 years in France, adventure was calling and he decided to leave again.

Sébastien has a Scientific Background and he is passionate about data, data analysis and loves a good spreadsheet! Often called a “geek” by his loved ones, Sébastien combines marketing and statistical analysis into a very useful skill for his clients. This allows him to get the most out of digital marketing strategies and to use the full power of the Internet and web-based tools.

He arrived in Cambodia in August 2016, and quickly found a job in the biggest restaurant group in Siem Reap. Here, he developed some famous restaurants of the city including Embassy restaurant, Abacus restaurant, DID – Dine in the Dark, and Kanell dinner show.

It was during this experience that Sébastien and William met and started to work together and develop strong affinity and friendship through the development of the restaurant websites and digital marketing strategies.

They have been very successful and they have found that the combination of their experiences and skill sets work well together.

It wasn’t long after that Olive & Lake was born. 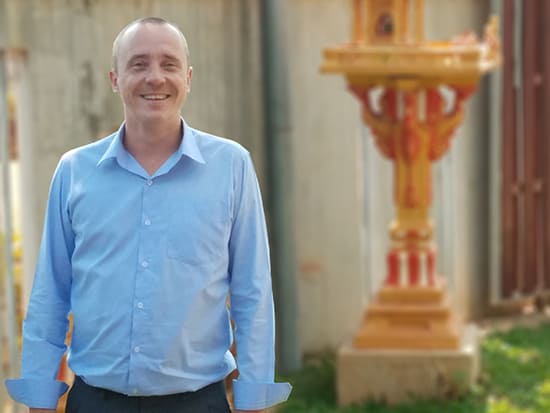 William is a Digital Marketing Specialist and Website Designer with extensive knowledge of SEO.

Born in the early 1980s, William was brought up on computing classics such as the Amstrad CPC464, the Commodore Amiga, Sega Master System, Windows 3.11, MS DOS and other forgotten platforms.

It was during this time that he developed an interested in anything to do with computers.

William has a Bachelor’s and Master’s degree in law. It was here that he honed his skills as an accomplished academic writer. Skills which were later very useful when he decided to take up SEO.

After the 2008 economic crisis hit, William decided to leave the UK. He sold all his belongings and set off armed with the clothes on his back and a laptop.

By the end of the year, he had made his very first website. It was a website dedicated to learning English and giving advice to ESL teachers.

He coded it himself, spent countless nights making mistakes and knew nothing about SEO.

In 2011, William made his first dollar online. It was at this point he knew that he wanted to work online.

William set about spending the next six or seven years of his life researching, making mistakes, building websites, creating backlinks, learning and reading everything he could find about digital marketing and SEO.

Fast forward to today and William has grown his business and has helped over 120 clients increase their online presence with well-built websites, successful SEO campaigns, social media marketing, and more.

William now specialises in digital marketing and SEO. He has a proven track record and a reputation in Siem Reap the “guy to go to” for help.

Above all, William never stops learning because he knows that knowledge is what keeps him ahead of the curve.

Our team of dedicated staff located in Siem Reap, Cambodia.

The new partnership between Sebastien Olive and William Lake was born with the opening of their new office in Siem Reap. This historical moment is marked with a new day in the office doing what we do best making sure the world can find our clients.

For years William didn’t have time to make his own website, he was too busy working on his client’s projects.

Finally, Sebastien sat him down and said “enough is enough, we need a new website.”

So we made one and it went live today! It’s a simple website, just a one pager, but within weeks, it was ranking highly in Google for all their main keywords.

We spent the year adding to our client base, increasing our team members and optimising our processes to be more efficient. Things were going well. Our team were getting bigger bonuses than ever before and we were making plans for international expansion.

Like everyone else around the world, the Coronavirus affected our business in ways we couldn’t imagine.

We regrouped and make a plan to get through this pandemic and out the other side.

The corona virus finally gave us time to build a website which accurately reflected the services we provide.

Olive & Lake isn’t just another website design agency. We offer full services for businesses with a focus on the hospitality industry.

We have created tools which many hotels use and we take care of revenue management and digital marketing for many hotels around the world.

It was about time our website reflected who we really are.

We developed a tool to help us save a lot of time. Our revenue management officers were spending nearly 50% of their time manually checking prices for our clients.

This had to stop.

We developed an in-house tool to automate this entire process.

It was a triumphant success and moved us to the next level of increased visibility across all sales channels.

Today, we decided to make it public.

We work with professionals from all over the world. Below are our trusted contacts who we regularly work with.

When we need something coded quickly and efficiently, we turn to Elvis. Knowledgeable, professional and honest – exactly what we look for in people we work with.

Régis is a photographer who we often recommend to our clients for a variety of photography jobs. He is versatile, professional, easy to work with and he takes great photos!

Ioana is a great writer and reliable person to work with. She’s worked with us on writing many pieces of content for various topics. Professional, considerate and a pleasure to work with.

Julien is a photographer who specialises in 360 degree photography. His extensive portfolio, attention to detail and unparalleled work ethic makes him a good fit for Olive & Lake.

Have you seen our Rate Parity Checker?

Do you want to chat with us?

Send us an Email

Do you prefer apps?

We need a few details, please!

Or send us a message!